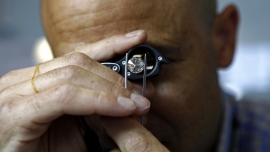 “For the first time since 2011, 2018 saw the Israeli diamond trade stabilize," writes The Israeli Diamond Industry, bringing to an end what the President of the Israel Diamond Exchange (IDE), Yoram Dvash calls “a few years of crisis." According to the Diamonds, Gemstones and Jewelry Administration in the Ministry of Economy, exports of polished diamonds fell by only 2.5% percent to approximately $4.5 billion, representing an improvement over sharper declines in recent years, while polished imports reached $3.0 billion, an improvement of 4.1% over last year. The increase in imports in polished diamonds is said to be at least in part a result of an extension of the inspection period for dealers to assess diamonds, which increased to 30 days tax-free.

Meanwhile, rough diamond exports rose by a modest 1.1% to $2.25 billion after declining by 18% to $2.23 billion in 2017. Rough imports also fared rather poorly; having tumbled by 12% in 2017 to $2.85 billion, they declined by another 7% in 2018 to $2.6 billion. IDE president Dvash said, “We’ve recently begun to feel cautiously optimistic, as well as hope for the future of our industry. Diamond exports in 2018 marked a slight increase year-on-year, although changes in the system of measurement mean that the actual increase isn’t reflected in the data, which shows only a certain stabilization in polished exports. Either way, I’m very glad that the sharp decrease in exports has been stopped, and for the signs that our industry is headed for a brighter future in 2019”. What the changes to the system of measurement entail is not specified.

Danny Tal, Director of the Diamonds, Gemstones and Jewelry Administration, said that during 2018, his office launched a comprehensive plan to support the Israeli diamond industry. The plan, he said, enables diamond traders to get credit in US dollars from a state-funded foundation. They also invested in marketing efforts. Tal added that in lieu of the challenges in the industry and stronger competition from abroad, especially from the US, Hong Kong, India and Belgium, the government has eased several regulatory policies.