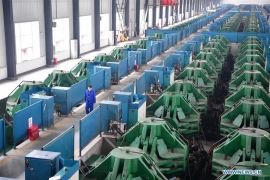 “If even a fraction of Chinese production is upgraded to jewelry-quality diamonds, it would have a very significant impact on the global supply which is only in the low-millions-of-carats," independent diamond analyst Paul Zimnisky told Xinhua News journalists Wang Zichen and Shi Linjing. They cite several analysts who suggest that China, long a major consumer of mined diamonds, now has a realistic chance to become a supplier of man-made ones and shape the lab-grown industry, but the scenario for substitution – when consumers become indifferent to provenance – is far from likely.

By Chinese industry estimates, the country has been producing well over 10 billion carats of diamond annually for almost a decade, but most of the products have gone to industrial use such as in abrasives, oil rigs or high-tech applications in aeronautics and electronics. Hu Junheng, head of gemstone business at Henan Huanghe Whirlwind – with annual production of 1.2 billion carats, mostly for industrial use – told them that Henan Huanghe Whirlwind and other companies are turning to jewelry-quality production. Sino-Crystal, another Henan-based company, said it now produces between 2 and 3 million carats a year, over half of which are for jewelry. The original rough might be of poor quality, but can be enhanced to mimic the appearance of natural polished diamond.

Liu Yongqi, general manager of Sino-Crystal, says De Beers’ launch of Lightbox – a move to grab some market share for a spinoff product it openly claims is of inferior quality – spurred the synthetics market. Whether this market will develop separately from the natural market depends on consumers, and as De Beers told Xinhua in a statement, “Our research consistently shows that people see synthetic diamonds as a different product category from natural diamonds, just as they see synthetic rubies, emeralds and sapphires as different product categories from their natural counterparts." Margaux Donckier, spokeswoman for the Antwerp World Diamond Centre, said the same: “Diamonds and synthetic diamonds should be seen as two different products. They are certainly not interchangeable," while Zimnisky believes that lab-grown diamond jewelry will fall into the category of “fashion jewelry" while natural diamonds will remain “fine jewelry."

Liu, of Sino-Crystal, said that man-made diamonds might not cannibalize sales of mined diamonds, but synthetic-diamond jewelry may still be a profitable market for Chinese manufacturers – despite the possibility that with so many cheap goods readily available, it is likely that any value synthetics may claim – whether real or perceived – will plummet. Representatives of the natural diamond market are mainly concerned that the two products remain clearly demarcated so consumers know what they are buying, as current regulations stipulate.