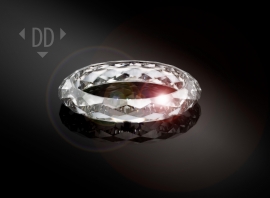 Dutch Diamond Technologies (DD) has created the world’s first ring that is entirely made from a lab-grown diamond. ‘Project D’, DD’s name for the ring, took a year to manufacture and was created in honour of the company’s 10th anniversary. For grading this unique piece of jewelry, DD turned to HRD Antwerp, Europe’s leading authority in diamond grading, writes the grading lab in a press release.

The ‘Project D’ ring has been made from a large piece of 155 carat rough CVD lab-grown diamond – a monocrystalline diamond wafer (see detailed description here) – which was polished using laser cutting and traditional techniques into a ring which has 133 facets, compared to 57 for a standard brilliant cut. The ring has a total weight of 3,865 carats. It wasn’t until 2017 that it became technically possible to grow large enough monocrystalline lab-grown diamond plates. This is not the first ring to be created from a single diamond. In 2011, Shawish, the Swiss jeweller, unveiled the world’s first wearable ring made from a single crystal of natural diamond. Additionally, another lab-grown ‘all diamond’ ring, called (RED), has been conceived by the Diamond Foundry, but as far as we are aware, the production phase has not yet started.

“For our 10th anniversary we wanted to create something stunning that would highlight our innovative and high-tech techniques,” says Ton Janssen, CEO of Dutch Diamond Technologies. “I think we’ve more than succeeded with the one-off ‘Project D’ ring. It’s a true “European” ring: grown in Germany, cut in the Netherlands and graded by HRD Antwerp in Belgium. HRD Antwerp has a well-earned reputation for delivering a perfect grading system thanks to their sophisticated equipment and dedicated team.” The quality and carat weight of CVD synthetic diamonds has increased drastically over the last ten years, taking up to 5 weeks to grow a diamond plate of this exceptional size in a laboratory. Growing a diamond with the CVD process requires a heated mixture of hydrocarbon gas and hydrogen in a vacuum chamber at very low pressure and elevated temperatures (900-1200°).

“DD might be relatively new to cut diamonds for the jewelry market,” says Michel Janssens, CEO of HRD Antwerp, “but they have created an impressive ring for their 10th anniversary. The outstanding cutting and polish work has resulted in a brilliant light reflection which emphasises the beauty of the ring.” HRD Antwerp has thoroughly analysed the ring and delivered the following grading results: Clarity VVS2, Colour E, Fluorescence NIL, Polish Very Good and Symmetry Excellent. A lab-grown diamond grading report is easily distinguishable from a natural diamond grading report by its green color cover.