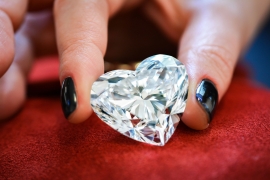 Americans are expected to spend a record amount on Valentine’s Day this year despite a years-long decrease in the percentage of people celebrating the holiday, according to the annual survey released today by the National Retail Federation (NRF) and Prosper Insights & Analytics. Of the estimated $20.7 billion the NRF expects US consumers to spend on the holiday, almost $4 billion will be on jewelry, putting it at the top of the list, despite the fact that only 18% of people surveyed are planning to gift jewelry (26% men, 9% women). Gifts of jewelry come in just ahead of an evening out, on which the NRF expects people will spend $3.5 billion.

The NRF notes that ten years ago, more than 60% of adults planned to celebrate Valentine’s Day; today, that’s dropped to just over half. Among those celebrating Valentine’s Day, a quarter plan to give a “gift of experience” such as concert tickets or a day at the spa this year. It is significantly more popular among younger consumers – 39% of those 18-24 and 45 percent of those 25-34 plan to give an experiential gift, a trend which extends beyond Valentine’s Day. Among age groups, those 35-44 are the biggest Valentine spenders at $279.14, followed by those 25-34 at $239.07. “The vast majority of Valentine’s Day dollars are still spent on significant others, but there’s a big increase this year in consumers spreading the love to children, parents, friends and coworkers,” said NRF President and CEO Matthew Shay. Gifts for pets are also popular, purchased by 20% of people, with spending is expected to total $886 million, up $519 million since NRF first asked in 2008.