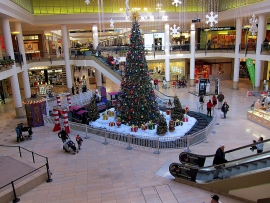 Holiday retail sales in the U.S. during 2018 grew a lower-than-expected 2.9 percent over the same period in 2017, according to the National Retail Federation (NRF), falling short of their forecast that holiday sales would grow between 4.3 percent and 4.8 percent. From November 1 through December 31 reached $707.5 billion, according to figures from the Commerce Department, whose results were delayed by nearly a month because of the recent government shutdown.

“All signs during the holidays seemed to show that consumers remained confident about the economy,” NRF President and CEO Matthew Shay said. “However, it appears that worries over the trade war and turmoil in the stock markets impacted consumer behavior more than we expected. It’s very disappointing that clearly avoidable actions by the government influenced consumer confidence and unnecessarily depressed December retail sales.” The total includes $146.8 billion in online and other non-store sales, which grew 11.5 percent over 2017. NRF had forecast that the online sector of retail would grow between 11 percent and 15 percent to between $151.6 billion and $157 billion.

“Today’s numbers are truly a surprise and in contradiction to the consumer spending trends we were seeing, especially after such strong October and November spending,” NRF Chief Economist Jack Kleinhenz said. “The combination of financial market volatility, the government shutdown and trade tensions created a trifecta of anxiety and uncertainty impacting spending and might also have misaligned the seasonal adjustment factors used in reporting data." Following a healthy October and November, retail sales in December were up only 0.9 percent year-over-year and down 1.5 percent seasonally adjusted from November.