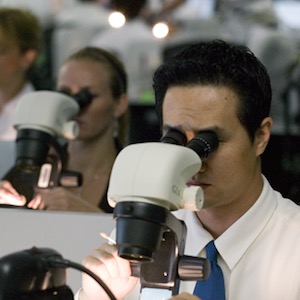 In 2006, when Gemological Institute of America (GIA) chairman Ralph Destino announced that its grading lab would issue reports for lab-grown diamonds, it caused a huge uproar and fear in the traditional diamond market. But it shouldn’t have.

In the ensuing years, the GIA Synthetic Diamond Reports have gotten very little traction, with most sellers opting for other labs. Which is surprising, considering GIA’s profile and prestige, and the fact that some consumers won’t buy high-end diamonds, including lab-grown ones, without a GIA report.

Why the antipathy? For one, the GIA calls its reports “Synthetic Diamond Reports,” and people in that business hate the word synthetic. For another, it uses a “descriptive” scale with general grading categories rather than the standard Four Cs. For color, it uses the general categories: “colorless,” “near colorless,” “faint,” “very light,” and “light.” For clarity, it uses the “VVS” and “included” categories, without rating them a 1 or a 2.

Last month, the GIA said that it was considering changes to the report in light of the changes to the Federal Trade Commission’s (FTC) Guides and in the market. It said the new reports were coming “soon.” It’s announced little since.

That’s caused a lot of speculation, but one can read some tea leaves. GIA will certainly make the word synthetic less prominent on the reports and likely not use it at all, as the FTC has removed it from its list of recommended qualifiers for lab-grown diamonds. (The FTC did not, contrary to some assertions, say that the term should never be used.) GIA has also said that it believes all treatments should be disclosed, even to lab-grown gems. It doesn’t currently include that information on its reports, but it likely will in the future.

But the big question is whether the GIA will grade lab-growns using the standard Four C grading scale, as HRD Antwerp announced it would this week. People in the lab-grown business have high hopes that will happen.

But one source thinks that, as is its wont, the GIA will play it safe. While it may include more color and clarity data, it seems unlikely—at least as I type this—that it will go the full monty and grade diamonds according to the standard Four C scale. The GIA probably considers this a compromise. For people in the created business, it would likely be a deal breaker.

The original GIA grading system was designed to assign grades based on diamond rarity, on how difficult they are to find in nature. So, D is the highest grade because it’s hard to find diamonds with no color.

A good grower can deliver color grades on command. Therefore, one could argue, the grades should be based on appearance, rather than rarity.

Now, lab-grown diamond qualities do vary, as they do with naturals. But the rarity breakdown may not be the same as it is in the natural sphere and could change as technology improves. Therefore, the GIA has said, since it “has yet to see the continuum of grades with synthetic diamonds…we felt it did not make sense to have the same level of fineness for reporting the colors.” You can read more of its reasoning here.

It’s also possible that growers may unlock the secret to consistently manufacturing D flawless diamonds. (I’ve spoken to people in that industry who worry about that, as it would make the product less like naturals.) And while we are far from that point, if that does happen, one could argue there will be little reason to grade them. It would be like grading an iPhone. That’s the rationale Lightbox gives for not including reports for its diamonds.

I understand and am sympathetic to those arguments—at least most of them. What I don’t find persuasive is the most frequently stated rationale: that GIA shouldn’t grade lab-growns simply because some in the trade don’t like them or feel threatened by them.

Some people love man-made diamonds, some don’t. That’s fine. People should sell only what they believe in.

But I cringe when I read something like this from a commentator (and respected colleague) last week:

Why would you want to grade a [lab-grown diamond]? There is nothing special about it. It has not made the fascinating and unique journey from the depths of the earth where it was created millions of years earlier.

I agree that natural diamonds have a fine story to tell. But we should be careful about disparaging other products and consumer choices. Many people use man-made diamonds for their engagement rings. That makes them special.

Others argue that lab-growns are “fakes” (nope) or intrinsically worthless. There is a legitimate question about what will happen to the price of created gems over the long term. But that is not a question any of us can definitively answer.

As with natural diamonds, lab-growns have value because people assign them value. There are lab-grown diamonds that sell for tens of thousands. Even at Lightbox prices, a 4 ct. stone would be worth $3,200. That’s not nothing.

Back to GIA. I don’t envy it for having to make this decision. It is likely receiving pressure from both sides. This is, as they say in the lab business, a borderline call.

However, the GIA has to be guided by its mission, which is to serve the consumer. And for that reason, I believe it should offer the standard Four C grading scale for lab-grown diamonds.

That would help the consumer in three ways:

– Right now, few growers submit their diamonds to GIA. If it offered standard grading, GIA would get a far better sense of the market, and that would help its mission to research and identify synthetics and treatments.

For instance, one employee at a retail chain told me he’s seen certain lab-growns change from white to yellow when they were sized. “Imagine a G color morphing to a K,” he said. That doesn’t seem common, but if it occurs in even one stone, we need to understand why it’s happening and make sure it’s disclosed. Natural diamonds have long been subject to tricky treatments. It’s not unimaginable that is happening with lab-growns too. There is also an increasing—even if it is, to some, counterintuitive—issue of naturals being mixed with lab-growns.

The GIA has some of the best in the business at spotting this stuff. But you can’t spot what you don’t see.

– As I mentioned, the GIA will likely include treatment information on the report. One can argue whether this information should be required, given there is no proven value differential. But, clearly, the more information that’s provided to the consumer, the better.

One final point: While I believe that the GIA should make Four Cs grading available to lab-grown companies, it should also give growers the option to use the simpler scale. And they should seriously consider that.

The simpler grading scale is arguably more consumer-friendly and easier to grasp than the full grading system, which is quite complex and has long cried out for an update. It’s almost impossible to see the difference between a D, an E, and an F with the naked eye. Calling a stone “colorless” makes a lot more sense.

The rarity-based GIA scale was designed for the trade. (That’s why it starts with D.) Most consumers care only about a diamond’s appearance. A scale based on how a stone looks serves consumer needs far better than one based on rarity. The natural industry should consider adopting it as well.

We keep hearing that lab-grown diamonds are disruptive. And yet lab companies price them based on the Rapaport Diamond Report and grade them using the standard Four Cs. The Rap list is four decades old, and the GIA scale dates back to the 1950s. Both have merit and have stood the test of time. But they could also use an update.

The lab-grown industry prides itself on being consumer-focused. And yet here we have the GIA offering a simpler consumer-friendly scale and hipster disruptors saying, “No, we want to use the old traditional confusing one.”

For now, it’s not clear how the GIA will change its reports—and when that change will be announced. But in the meantime, the lab-grown community should perhaps not see the GIA’s simpler scale as an insult, but as a point of differentiation, and even an opportunity.