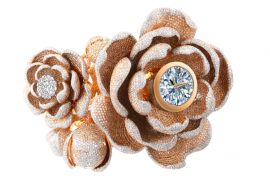 Coronet, the signature brand of Hong Kong-based Aaron Shum Jewelry, has been awarded its ninth Guinness World Record, this time for the most diamonds set on a watch: 15,858, weighing a combined 50.01 carats. Unveiled at BaselWorld last week, the watch is named Mudan 牡丹, which is Chinese for peony, a flower recognized as the King of the flowers in the Chinese culture.

The watch is set in 18K gold and features jewelry designer and artist Reena Ahluwalia’s diamond painting on the dial. The company also showcased its latest jewelry collections at the fair, featuring a new watch collection in partnership with Ahluwalia, also featuring a painting of a diamond.

The Coronet brand has been finding the headlines in recent years. In 2015, the Coronet® diamond guitar, set with more than 400 carats of diamonds on 1.6kg of 18k gold, was verified as the world’s Most Valuable Guitar by Guinness World Records; in the following year, Coronet® collaborated with Hollywood superstar Jermaine Jackson in creating “Circles of Life”, a Fender bass set with 16,033 jewels, earning the Guinness World Record for “Most Jewels on Guitar”.