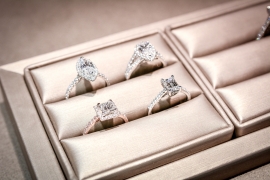 Global diamond jewelry sales grew 4% over last year to $85.9 billion in 2018, driven by persistently high demand in the first half of the year, according to Alrosa’s global luxury and jewelry market research. The global jewelry market grew at a slightly slower pace than the 5% growth achieved in 2017, a softening the miner attributes to a slowdown in key consumption markets in the second half of 2018.

While the market recorded a 6% rise over 2017 due to high demand from the local population and tourists in the key consumption markets, in the second half of the year, consumer demand in non-dollar countries began to show less steady growth rates, even declining in certain countries under the influence of national currencies weakening against the US dollar. The global diamond jewelry market slowed down to 2% growth in the second half of the year.