De Beers’ Lightbox brand is adding more $800 lab-grown 1 ct. solitaires to its site—but in a twist, they are being sold with piercings. 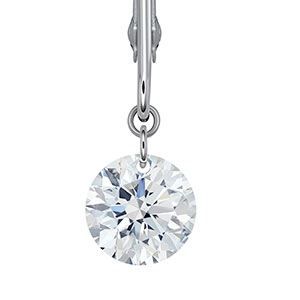 She admits the drill holes might affect clarity, but that is less of a concern for Lightbox, which doesn’t sell its diamonds with grading reports.

“I have seen it done with natural diamonds, but it is rarely done and I imagine one of the reasons it’s rarely done is you create a flaw in it when you drill through the material,” she says. “It’s something you could do more easily with a product that is not certed. With natural graded material it would probably change the grade.”

She says that the piercing produces a different, “more lively” look.

“It has movement,” she says. “It’s a quite modern way of presenting jewelry. It’s very simple, very alive. It’s a modern take on a solitaire necklace. People seem to like it, and we will probably make more.”

While JCK—and many in the lab-grown market—have noticed that true 1 ct. solitaires have been pretty consistently sold out on the Lightbox site, Morrison says the brand plans to up its 1 ct. offerings, beginning with this new pierced product.

Though, she sighs, people shouldn’t expect that those items will be easy to find.

“I know this will not be shocking, but the 1 ct. [solitaire] pendant is already sold out,” she says. “There is some kind of magic around that 1 ct. number.”